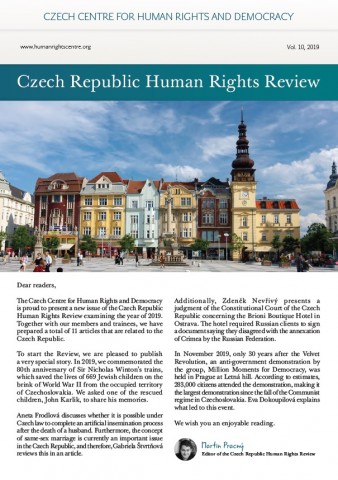 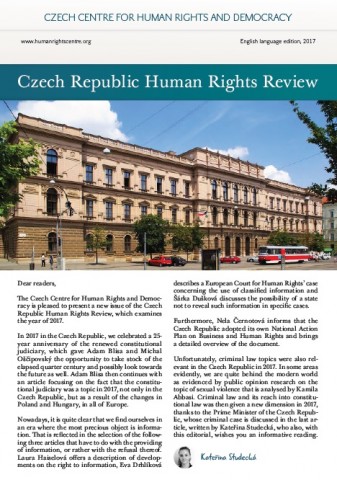 The Czech Centre for Human Rights and Democratization is pleased to present a new issue of the Czech Republic Human Rights Review examining the period of 2017.

You will find articles written by Adam Blisa and Michal Oščipovský focusing on the state of the constitutional judiciary in the Czech Republic and Central Europe, followed by articles from Laura Haiselová, Eva Drhlíková and Šárka Dušková on developments regarding the right to information and the use of classified information. Nela Černotová's article informs about the Czech National Action Plan for Business and Human Rights and the issue is closed by two articles from Kamila Abbasi and Kateřina Studecká focusing on criminal law topics. 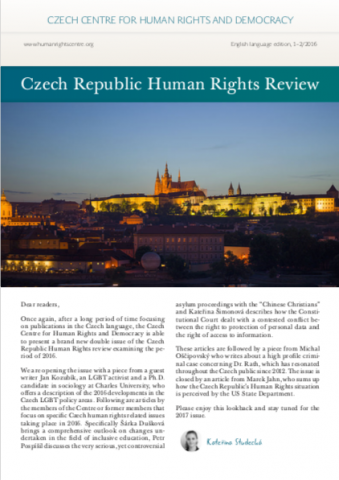 The Czech Centre for Human Rights and Democracy is proud to present a new issue of the Czech Republic Human Rights Review examining the period of 2016.

We are opening the issue with a piece from a guest writer Jan Koubík who offers a description of the 2016 developments in the Czech LGBT policy areas.

Following are articles by the Centre’s members or former members that focus on specific Czech human rights related issues we observed in 2016, e.g. Šárka Dušková’s comprehensive outlook on changes undertaken in the field of inclusive education or Petr Pospíšil’s article on very serious yet controversial asylum proceedings with the “Chinese Christians”. 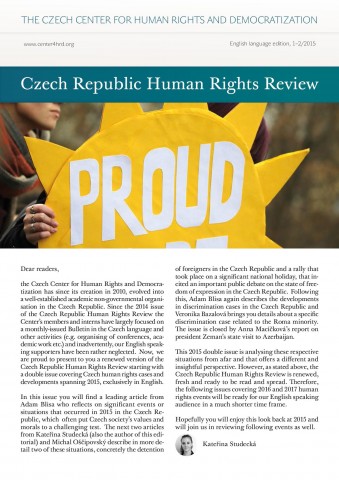 we are proud to present to you the 2015 issue of the Czech Republic Human Rights review. Despite the delay in its publication, we hope that you will find articles that will be of interest to you. And as is also stated in the editorial of this issue, we vow to deliver information about Czech human rights related events from following periods in a much timely manner. The 2015 issue starts with a leading article from Adam Blisa who reflects on significant events or situations that occurred in 2015 in the Czech Republic, which often put Czech society’s values and morals to a challenging test. You will also find information on the detention of foreigners in the Czech Republic and a rally that took place on a significant national holiday, that incited an important public debate on the state of freedom of expression in the Czech Republic. Other articles in this publication focus on the developments in discrimination cases in the Czech Republic or president Zeman’s state visit to Azerbaijan. We wish you an enjoyable reading. 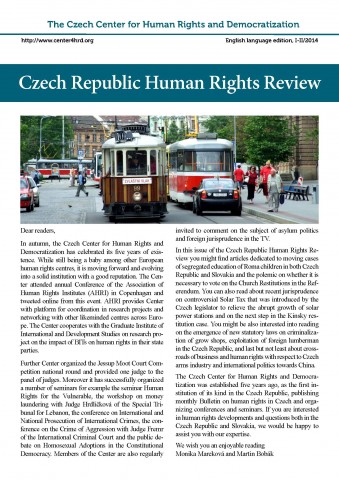 Dear readers, we are proud to bring to you a new issue of the Czech Republic Human Rights Review. In this issue, you might find articles dedicated to moving cases of segregated education of Roma children in both Czech Republic and Slovakia and the polemic on whether it is necessary to vote on the Church Restitutions in the Referendum. You can also read about recent jurisprudence on controversial Solar Tax that was introduced by the Czech legislator to relieve the abrupt growth of solar power stations and on the next step in the Kinsky restitution case. You might be also interested into reading on the emergence of new statutory laws on criminalization of grow shops, exploitation of foreign lumberman in the Czech Republic, and last but not least about crossroads of business and human rights with respect to Czech arms industry and international politics towards China. We wish you an enjoyable reading. 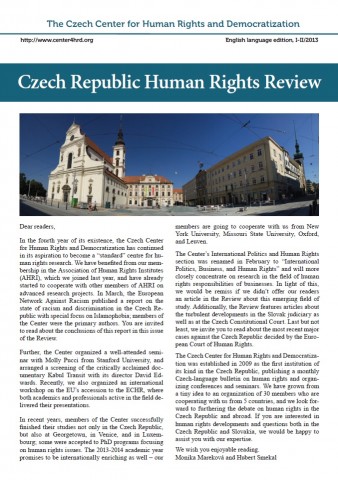 This issue of the Review offers you a summary presentation of conclusion of the European Network Against Racism report on the state of racism and discrimination in the Czech Republic, which was written primarily by Center's members. Additionally, the Review features articles about the turbulent developments in the Slovak judiciary as well as at the Czech Constitutional Court. Last but not least, we invite you to read about the most recent major cases against the Czech Republic decided by the European Court of Human Rights. 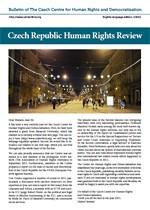