When Will The World Hear the Iranian Call For Liberty and Democracy? 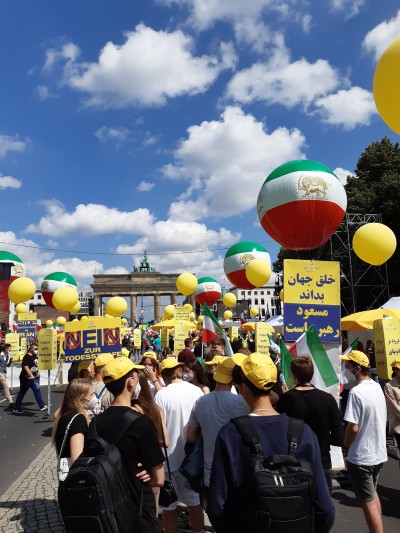 On 11 July 2021, the objectors to the regime of the Supreme Leader Ali Khamenei and the newly elected president Ebrahim Raisi gathered in front of the Brandenburg Gate in Berlin. A huge gathering waving Iranian flags has joined forces in a loud call for democracy and a chant of support for the opposition leader, Maryam Rajavi.

The banners protruding from the crowd were carrying slogans such as “Raisi is a murderer”, “I stand with Maryam Rajavi”, or “Rising up for Freedom”. Their holders fell into all age groups, from children to seniors. They all came from different parts of the world to memorialize the victims of the regime and to call for democratic change in Iran.

The gathering, called “Free Iran”, has been taking place every year for several decades mostly in Berlin or Paris. Tens of thousands regularly take part in a peaceful rally to draw attention to the governing religious dictatorship and the absence of human rights protection in Iran.

The Free Iran gathering was held during the Free Iran World summit of the National Council of Resistance of Iran (NCRI), which is a political organization connecting different Iranian dissident groups. Some of the speeches delivered at the summit were projected on the screens to the participants of the gathering.

After the appearances of several speakers, the gathering set out to a march through the streets of Berlin around the Brandenburg Gate and Bundestag. The crowd did not cease to appeal to the politicians and Chancellor of Germany, Angela Merkel, for an immediate response to the brutality of the Iranian regime.

Although the President and the Parliament in Iran are elected in universal suffrage, the actual power lies in the hands of the Supreme Leader elected by the Assembly of Experts. Since 1989, the position has been occupied by Ali Khamenei. The Supreme Leader controls the security services and appoints the heads of the judiciary power and the heads of state television and radio networks. Moreover, he is the commander-in-chief of Iran’s armed forces and is entitled to remove the president from office.

The presidential elections in June 2021 brought a victory to Ebrahim Raisi, a controversial opportunist already sanctioned by the United States and the European Union for his violent interventions against the demonstrators and his cruel treatment of prisoners. In addition, Raisi was a public prosecutor engaged in mass executions in 1988. At least five thousand political opponents to the regime established after the Iranian Revolution were tortured and murdered without due process.

Voice of the Opposition

In 1993, the President-elect of the NCRI for the period to transfer sovereignty to the people of Iran became Maryam Rajavi. Her husband, Massoud Rajavi, was one of the leaders of the opposition until 2003 when he disappeared without a trace. Maryam Rajavi now heads the opposition to the Iranian regime and represents the voice of the Iranian people during negotiations with democratic countries.

In a session of the Council of Europe in April 2006, Maryam Rajavi introduced her Ten-Point-Plan for the Future of Iran describing her vision of Iran as a democratic and secular republic ensuring justice and equal opportunities for everyone.

A speech that Maryam Rajavi gave at the NCRI summit in July 2021 was at the same time projected on the screens during the Free Iran 2021 gathering. She expressed her faith in people and a better tomorrow. “We demand liberty, democracy, and equality,” claimed Rajavi and subsequently called on the UN Security Council to launch an international prosecution of the Iranian regime’s leaders.

Rajavi also discussed the regime’s inability to protect its citizens against the pandemic of COVID-19. She blamed Khamenei for 320 thousand victims of the pandemic. Moreover, she stated that instead of purchasing the vaccines, Khamenei called the revolutionary guards to arms and let the citizens starve and die.

When Rajavi finished her speech, a flood of confetti in Iranian colours began to fall on the cheering crowd in front of the Brandenburg Gate.

The NCRI summit in July 2021 was also attended by several significant personalities of world politics, such as the former Canadian Prime Minister, Stephen Harper, and the current Slovenian Prime Minister, Janez Jansa. Most of the speeches were also broadcasted live in Berlin. Furthermore, some members of the Bundestag for the CDU attended the Free Iran gathering and delivered their speeches in person.

A stir was caused by the speech of the former US Secretary of State, Mike Pompeo, as he stated: “The regime is at its weakest point in its now 40 years of existence.” The United States intend to hold the Iranian leaders accountable for their crimes against humanity in 1988 and to pressure the regime until the leaders change their behaviour. Pompeo further expressed remorse for the victims and said that they would never forget and always pray for the loved ones lost and the ones in prison.

Among the participants of the rally, there were several victims of the Iranian regime. Fatholah Khamenei, an architect, designer, and artist who uses the pseudonym Arjang, was imprisoned in Iran for seven years. In prison, he recorded his experiences in many drawings, and afterwards, he drew his memories in a book accompanied by illustrations from prison.

With a strong flame of hope in his eyes, Arjang was walking among the gathered and offered them his book describing his entire life. Even though he currently lives in Berlin, he continues to fight for the freedom of Iran, persuaded that he will live to see it.

Hope was the main message of the entire human rights meeting. Although the situation in Iran is very serious and an immediate reaction is necessary, none of the speakers forgot to emphasize their belief in an early turn for the better.