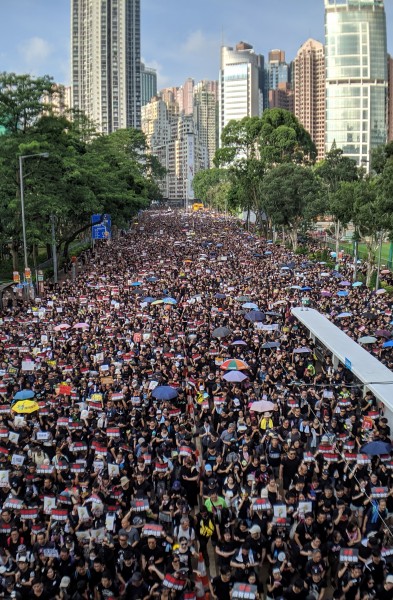 For the past few weeks there have been numerous demonstrations filling the streets of Hong Kong. The police suppressed the demonstrators using a high level of violence in an attempt to calm the situation. Why are the citizens of Hong Kong assembling and what initiated the protests?

The Extradition Bill [1] is an amended bill proposed by the government of Hong Kong in January 2019. The bill shall fix the legal loopholes that enables criminals to safely stay in the city. However, it simultaneously proposes a threat to the “one country, two systems”, since it leaves citizens of Hong Kong and those passing through the city vulnerable to possible trial (possibly unfair) in front of the courts of Mainland China, which are controlled by the Communist Party of China (CPC).

After being under British rule, the city of Hong Kong was returned to China in 1997 after it reached a deal with the UK in 1984, which established the principle of “one country, two systems”. Consequently, Hong Kong now has its own legal system, borders and rights, including the freedom of assembly and free speech.

The “one country, two systems” became a national law after the enactment of the Hong Kong Special Administrative Region (HKSAR) Basic Law. The system attempts to maintain prosperity and stability of Hong Kong, aiming to re-achieve a peaceful national reunification. The main purpose of the system is to enable Hong Kong, Macao and Taiwan to freely practise capitalist systems, whereas Mainland China maintains its one party rule policy and continues to practice socialism.

Deng Xiaoping, the Paramount leader of the People’s Republic of China (PRC) adopted the ideas of Vice-Chairman Ye and the concept was used for the first time: “Two different systems are allowed to co-exist… By and large, the relevant policies may be applied not just to Taiwan, but also to Hong Kong”. HKSAR remains highly autonomous concerning the areas of political system policies, laws, and Hong Kong’s status as an international financial centre and free port. However, the PRC has power in matters of national defence and foreign affairs.

The proposal of the bill’s amendment directly threatens to violate basic human rights, since, if enacted, the bill enables the Chinese authorities to target “critics, human rights activists, journalists, NGO workers” and basically anyone else in Hong Kong. In June, in an open letter to Chief Executive Carrie Lam, Amnesty International, Hong Kong Human Rights Monitor and Human Rights Watch stated the commonly shared concerns: “Given the Chinese judiciary’s lack of independence, and other procedural shortcomings that often result in unfair trials, we are worried that the proposed changes will put at risk anyone in the territory of Hong Kong who has carried out work related to the Mainland, including human rights defenders, journalists, NGO workers and social workers, even if the person was outside the Mainland when the ostensible crime was committed”.

As a result, dissatisfied citizens have poured into the streets of Hong Kong, demanding a retraction of the amended ordinance. The first demonstration took place in March of this year and was led by the Civil Human Rights Front (CHRF). Although the police said that only 5,200 people participated, the media claimed that the figure was actually 12,000. In June, more than 3,000 lawyers marched through the streets participating at a lawyers’ silent march. The biggest participation was in protests on 9 and 16 June, where the figure reached 1.03 million and in the latter,nearly 2 million. The main motive of the protest continued to be the extradition bill, however, the resignation of Chief Executive Lam was demanded for the allegedly tactically motivated pause in the passage of the bill.

At the end of June, the protesters defied the police ban and were protesting again. This time, however, the protest lasted for three days in a row. The demonstrations were no longer only about the extradition bill, but also stand for democracy and police accountability. Not only are there allegations of Hong Kong’s police use of inadequate force during violent clashes, which intensifies from protest to protest, but police also continued to undervalue the actual figure of protesters participating.

The extradition bill went through the first reading, however, the second one is indefinitely suspended at the moment. Nevertheless, the protests will most probably continue, as the demonstrators demand the complete and formal withdrawal of the bill. These protests will not only affect the internal relations in Hong Kong itself, but they will also have a worldwide impact as countries around the world cautiously monitor the situation, including the role of China. [2]

At the end of June, China’s spokesman for Hong Kong and Macau affairs claimed the protesters were “committing evil and criminal acts, that have seriously damaged the semi-autonomous city’s reputation and stability”. In his speech, he called on Hong Kong’s public to condemn the protests and violence, while claiming “Hong Kong is China’s Hong Kong. Hong Kong’s affairs are China’s domestic affairs”. This is the first time the Chinese  government issued an announcement following numerous weeks of ongoing protests in Hong Kong, which unfortunately yet again raises doubts about whether or not China pursues to weaken Hong Kong’s autonomy.

During August, the demonstrations escalated as the protesters drew attention to five demands [3] by blocking Hong Kong’s airport for three days, creating a fifty meters long human chain and by dismantling smart lamppost allegedly used to monitor citizens. Hong Kong’s police used force against mostly unarmed protesters arguing the use of force is needed to calm the situation after the protesters had ignored the police ban on demonstrations.

In September, protesters yet again blocked Hong Kong’s airport and thousands of school and university students boycotted classes. Moreover, Reuters published an article claiming that Chief Executive Lam told a group of businesspeople that if she had a choice, she would resign and that the political room for her to maneuver between Hong Kong and PRC is very limited. Furthermore, Carrie Lam announced at the beginning of September that her government will formally withdraw the bill, which means that Lam conceded to one of the five demands. However, it is arguable whether the protests will calm down as even after Lam’s announcement, they continue to gather and the situation remains the same with dozens of people arrested.

[2] For example, the EU stressed out the importance of the compliance with the basic human rights such as freedom of assembly and expression which need to be ensured in every democracy. The members of the European Parliament have also come together calling on Hong Kong to withdraw the bill and introduce democratic reforms, and suggested the EU-wide ban on supplying weapons to the Hong Kong police.

[3] The main objective of protesters is to achieve the following five demands: “withdrawing the bill, the resignation of Hong Kong Chief Executive Carrie Lam, no prosecutions of protesters, stop labeling the protests “riots” and holding police officers who fired rubber bullets at protesters accountable”.

Reuters. 2019. Exclusive: “If I have a choice, the first thing is to quit” - Hong Kong leader Carrie Lam - Transcript (https://www.reuters.com/article/us-hongkong-protests-carrielam-transcrip/exclusive-if-i-have-a-choice-the-first-thing-is-to-quit-hong-kong-leader-carrie-lam-transcript-idUSKCN1VO0KK)